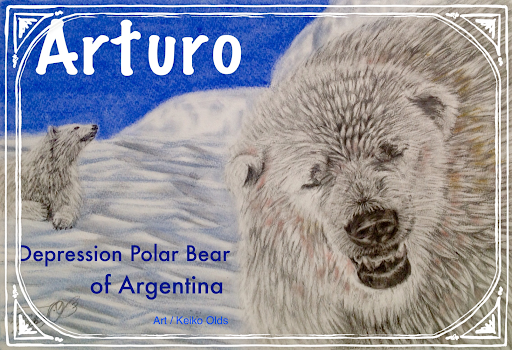 Arturo bear is in poor health and analyze sedated to make studies
The animal has shown signs of decay and decline in physical activity and appetite. Has 30 years. Friday, May 6, 2016
Read more http://www.losandes.com.ar/article/alerta-por-el-delicado-estado-de-salud-del-oso-arturo?rv=11 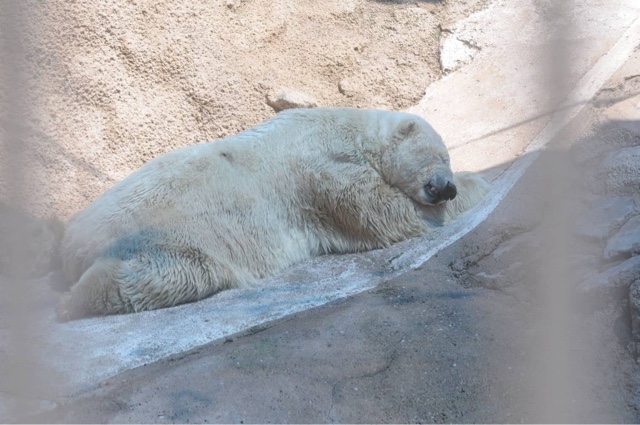 Arturo has been in mourning since the death of his companion in 2012. It is summer now in Argentina, and he is exhausted from the heat. A trip to cool Canada might brighten his mood.
Such is life for an aging, depressed polar bear at a zoo in Mendoza, at the foot of the Andes in western Argentina.
On Friday, veterinarians from Canada, Chile and Argentina will determine if the 29-year-old animal is in shape to endure the long trip to Canada, where a zoo in Winnipeg has offered to adopt him.
In Mendoza and elsewhere in Argentina, no one is indifferent to the fate of the bear.
People still remember the tragic death of another polar bear, 16-year-old Winner, who passed away at the Buenos Aires zoo during Christmas 2012 as temperatures reached 40 degrees Celsius (104 Fahrenheit).
Over the past 20 years, Arturo has grown accustomed to the hot summers and mild winters of Mendoza. The question now is whether he can handle Canada's frosty winter.
Born in the United States in 1985, Arturo arrived in 1993 in Mendoza, a city of 120,000 known for its wine production.
"Despite his age, he is good condition," said zoo director Gustavo Pronotto. He said the life expectancy of a polar bear is just over 20 years and that in captivity, they can often live to see age 30.
Assiniboine Park Zoo in Winnipeg has proposed paying for the transport costs.
Greenpeace has gathered 160,000 signatures in a campaign to transfer Arturo urgently to Canada, which it says has weather that more closely resembles what occurs in his natural habitat.
Canada is home to 60 percent of the world's 20,000 to 25,000 polar bears, which are concentrated in the Arctic -- including Russia, the United States (Alaska), Norway and the Danish territory of Greenland.
Classified as "vulnerable" by the International Union for Conservation of Nature, the polar bear (Ursus maritimus) is the planet's largest land-based predator.
He will be missed...
Besides Greenpeace, everyday people in Argentina have called for the animal to be allowed to go to Canada, saying the zoo here has been negligent.
Authorities in the province of Mendoza, which owns the zoo, have given the green light to sending the bear to Canada. But they have held up the operation pending the results of Friday's tests.
The zoo director says he understands local concern but says the bear "is not a package that one can move around like merchandise."
"Everything depends on the health of the animal and how he can withstand a 15,000-kilometer trip," said Pronotto, who is also a veterinarian.
"We must avoid a big mistake, like his death during the trip or upon arrival. One must evaluate the risks carefully. He is old, and this would require many hours of anesthesia."
Out in the wild, this feared hunter lives off seals and, when food is rare, also attacks musk oxen, reindeer and small rodents.
At the Mendoza zoo, Arturo is served 15 kilos of meat per day, and all the fruit and vegetables he can eat.
He also loves honey. And if his caretakers are late, Arturo growls to draw their attention.
As the zoo's mascot, he has an air-conditioned 35-square-meter (375-square-foot) enclosure, a 500-square-meter beach and a swimming pool in which his guards throw blocks of ice to keep it cool.
Experts say Arturo has been deeply saddened by the death in May 2012 of Pelusa, his mate for two decades, at age 30. She had several cubs, but none survived.

Arturo Zoocosis polar bear in JULY
Published on July 18, 2013
POLAR BEAR ARTURO in Mendoza Zoo, in the month of July 2013 In this video we see him with his long zoocosis of that terrible loneliness that afflicts us -. Walk from one side to another, always in the same place and that grievance and complaint grin on his face that hurts our souls -. their cage We watched from above and do not understand much abuse towards an animal that should be walking on ice and surrounded by sea -

Death of his companion in 2012

MAY GO TO CANADA

Arturo, the only polar bear in Argentina, seen in captivity at a zoo in Mendoza, 1,050 km west of Buenos Aires, on February 5, 2014
The experts said on Friday the trip was risky because it would require anesthetizing the aging bear for 24 to 48 hours, and ultimately, “he is fine, in good condition” right where he is.
“This is an animal that is 29 and has exceeded the normal life expectancy of 21 years,” said Eduardo Francisco, director of Temaiken, a renowned private zoo in Argentina.
“A significant sedation would seriously compromise, physically, an animal of this age and species,” he said.
Experts say Arturo was also deeply saddened by the death in May 2012 of Pelusa, his mate for two decades, at age 30. She had several cubs, but none survived.
“Arturo never emerged from his state of depression,” Mendoza zoo director Gustavo Pronotto said.
As the zoo’s mascot, he has an air-conditioned, 35-square-meter (375-square-foot) enclosure, a 500-square-meter beach and a swimming pool in which his guards throw blocks of ice to keep it cool.

Posted by MisoKeikoOlds at 1:21 PM